Myopain Seminars recently sent me to Dubai (UAE) to teach my newly revised ‘Manual Trigger Point Therapy’ (MTT-1) course. (I think I’ve just about got the right balance with the new course.) Dubai is redefining big. It now has the busiest airport, biggest shopping mall and tallest building in the world. I know because I did them all, including 125 floors up the Burj Khalifa (see pic). Dubai is a hive of construction activity, with very elegant designs, and all built to last. The skyline is full of cranes. Not the avian variety. 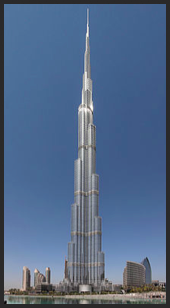 The 19 students I taught were all expatriates. I had local Qataris, Kuwaitis, and Omanis, plus a Jordanian, Malaysian, German, South African, Swiss, Swedish, Indian, English, French, and Thai. The common language was English and very few asked meto repeat myself, even with my New Zealand accent. They were a very smart and attentive bunch. At the culmination of the course we now conduct practice runs of the techniques and the students tested well.

The United Arab Emirates had a team in the recent Cricket World Cup. They did okay. Pakistan bases its home games in the Emirates because it is a little dangerous in Pakistan. I do love that sound of willow on leather. I asked a kid playing cricket in the street who he modeled his batting on, suggesting Tendulker. Dhoni, he said. I’m showing my age. On the last day of teaching students kept me informed on the fortunes of New Zealand versus Australia in the WC final, the first time NZ had made it that far. Let’s not talk about the result.

Boston has just had its snowiest ever winter. On April 8th it’s trying to snow again as I wait for my plane to DC to be de-iced. The Boston marathoners will pass the remnants of bulldozed snow mountains next week. Dubai also has snow. The slope at Ski Dubai is 400m long and has a quad chair to take you to the top of the ‘black’ run. Two hours skiing cost me $50 and was the most fun. Leaning over the handrail I got quite a shock. Four King or Gentoo (not sure which) penguins were doing their penguiny thing, following humans around and allowing petting. I have the video. Only in Dubai.